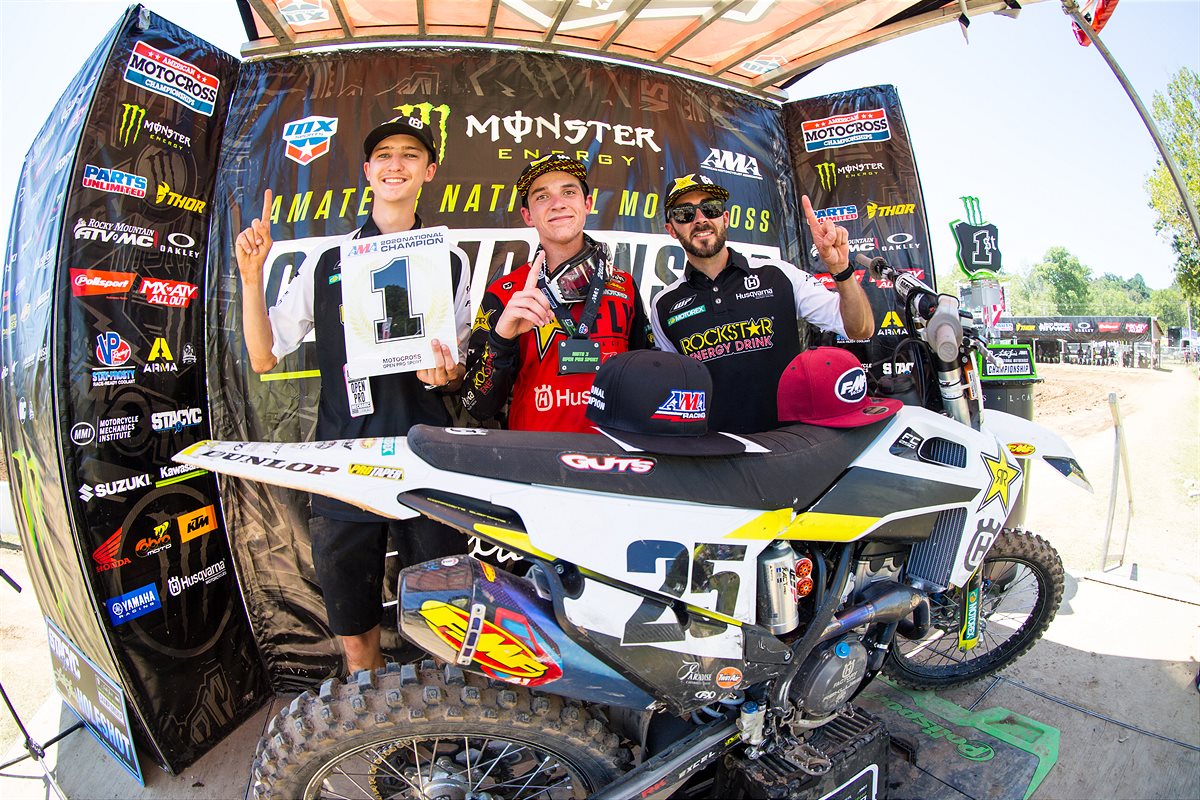 The AMA Amateur National Motocross Championship took place August 4-8 at the legendary Loretta Lynn Ranch in Hurricane Mills, Tennessee and it was Rockstar Energy Husqvarna Factory Racing Team’s Stilez Robertson who came away with the event’s highest honor – the Nicky Hayden AMA Motocross Horizon Award – after an impressive performance at the world’s largest and most prestigious amateur motocross event.
Robertson concluded his amateur racing career in a dominant fashion as he claimed a pair of titles in the premier 250 Pro Sport and Open Pro Sport classes. Scoring 2-1-1 finishes in the former class, and 1-2-1 finishes in the latter, Robertson showed tremendous consistency and poise throughout the week.
The Bakersfield, California native went on to make his professional debut in the 250MX class last Saturday at the opening round of the 2020 Lucas Oil Pro Motocross Championship, where he concluded the day with 22nd overall after getting caught up in a race-ending pileup during Moto 1.
Podium Finishers
Rockstar Energy Husqvarna Factory Racing Team’s Evan Ferry put forth a solid performance throughout the week as he secured second overall in the Supermini 2 (13-16) class with consistent 2-2-2 moto finishes, as well as third overall in the Supermini 1 (12-15) class with 4-5-2 finishes.
Additionally, Rockstar Energy Husqvarna Factory Racing’s Talon Hawkins earned a second-place finish in the Schoolboy 1 (12-17) B/C division with a solid 2-2-2 across the board. He also finished fourth-overall in the 125cc (12-17) B/C class with 7-3-3 finishes for the week.
In total, Husqvarna Motorcycles riders earned 12 overall podiums, five moto-wins and 32 podium-finishes throughout the week.
About Michael Le Pard 5156 Articles
"Mr. Totalmotorcycle". Owner and Founder of Total Motorcycle. Supporting over Motorcyclists and Motorcycling for 21 great years. Total Motorcycle is my pride and joy and being able to reach out 330 million people has been incredible but I could not have done it without the support of my visitors, readers and members, thank you so much! You are making a difference to millions of riders worldwide. Thank you.
Website Facebook Instagram Twitter YouTube LinkedIn

The Monster Yamaha Tech3 duo performed bravely today in Spielberg for the eleventh round of the 2018 MotoGP World Championship to conquer a ninth and a 16th position. Knowing that the Austrian circuit would be […]

GRT Yamaha Official WorldSSP Team rider Lucas Mahias will start the final race of the 2018 FIM World Supersport Championship from the front of the grid, after claiming his sixth pole position of the season […]