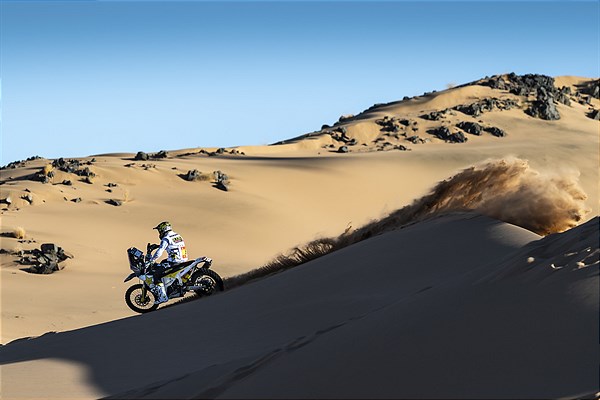 After close to three-and-a-half hours of racing, Quintanilla put in a superb performance on the opening stage from Jeddah to Al Wajh to finish just five-and-a-half minutes down on the day’s winner. The Chilean rider made a steady start to the 319-kilometre timed special before building his pace towards the finish as he became more comfortable with the Saudi Arabian terrain. The two-time Cross-Country Rallies World Champion will now enjoy an advantageous start position for Monday’s stage two.

Andrew Short, competing in his third Dakar Rally, also chose to take time to get comfortable with his FR 450 Rally and completed the long day of racing in ninth place. Losing just over nine-minutes to the leader on stage one, Short now has a great opportunity to make up time on Monday’s stage two by chasing down the front runners ahead.

Stage two of the 2020 Dakar Rally introduces the first ever ‘Super Marathon’ stage. Riders will not only be forbidden from having outside assistance from their teams at the end of the stage, they will also only be allowed to work on their own bikes for a maximum of 10 minutes. Of the 393 kilometres covered, 367 will be timed special as the route takes competitors from Al Wajh to Neom.

Pablo Quintanilla: “I’m feeling really good after today and enjoyed the mixture of terrain we rode. I think it’s always important to get a good feeling for things on the first stage, but my pace was still strong. My goal for today was to finish inside the top-10 to be able to attack tomorrow – I managed that comfortably so I’m really looking forward to the second stage and being able to push a little more.”

Andrew Short: “I took today as a bit of a warm up. I wanted to get a good feel for the bike and the terrain and make sure I didn’t make any big mistakes early on. I might have set off a little on the slow side but I soon felt comfortable and was able to push on towards the end of the stage. There is so much in front of us I think it’s foolish to go flat out right from the start. I really enjoyed the stage today, it started off quite stony with lots of crossing tracks but soon opened out into the dunes with some nice flowing lines. The terrain here in Saudi certainly seems unique and it looks like we’re set for a good adventure.”

Sign & Ride Purchase a new 2020 Ducati motorcycle and have no payments for 90 days** SPECIAL OFFERS Multistrada With the Multistrada family, you can experience the beauty of the journey every day, thanks to […]